The Wait is Over, and Lily Bagged Her Bear 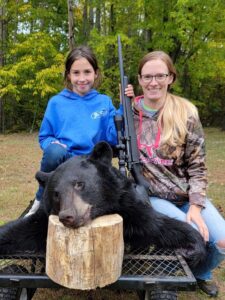 Kyle Murina was a recipient of a USSA bear hunt in 2010. He said, “It was a once-in-a-lifetime experience that I’ll never forget. Going through the struggles that a critical illness created for myself and my entire family, the hunt was a huge morale booster.” After receiving the notice in the mail, he was in the drawing and said, “I knew it was my turn to help a child out.”

Nine-year-old Lily was ecstatic when her mother, Amanda, told her Kyle had donated his bear license to her. Not long after that, her guide, Bruce Watruba, started sending trail cam pictures of the bear on his property. One was a big bear tearing the lid off the bait stump which excited Lily even more about her hunt.

Lily, Amanda, and Bruce initially hunted out of a wooden blind with windows overlooking the bait. Unfortunately, they did not see a bear, but the continuous pictures on the trail cam kept their spirits up for an extended sit. Bruce said, “We hunted for 79 hours in the blind, the longest we ever hunted. Little Lily did the best job she could, but the bear only came in when she wasn’t there.”

“It hurts so bad because you are sitting there like a rock. Some days were long, but I wanted to keep going until I got a bear,” said the determined young huntress!
On their fourth weekend, they decided to try hunting with hounds, and on the first day, they saw three bears several times but could not safely shoot them because they crossed the road with the dogs. Then a bear was in the corn but couldn’t get it out and finally wore the dogs out. Then early the following morning, it didn’t take long, and they found a good fresh track as the rig dogs winded a bear and started barking. So they let the start dog out, and the bear group released their other pack dogs soon after. 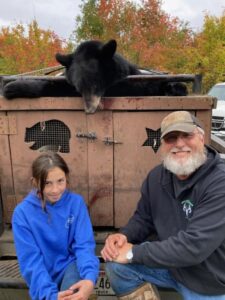 Lily said, “the guides have a GPS tracker in their truck and tracking collars on their dogs. So we could tell where the dogs were running, and then we heard them barking. Then, when they were finely standing still, we knew they had the bear treed.”

Forty-five minutes into the hunt, the dogs had treed a bear half a mile from their trucks. They watched the dog for a bit upon arrival at the tree, then got her in position. Next, Bruce and her dad got the 6.5 Creedmoor rifle on the tripod and helped her stabilize it. “It took me a while to get ready, I took a couple of deep breaths, then made one shot, and the bear fell straight down to the ground.

Bruce said, “I felt so excited for Lily when the bear fell out of the tree because she worked so long and so many hours for it, and that was by far the most challenging hunt I have guided for a kid.”

“Bruce and the bear hunters were excited for me,” said Lily. “Some hugged me, and some said congratulations and gave high-fives too. I am very thankful for them and Kyle, who donated his bear license to me.” 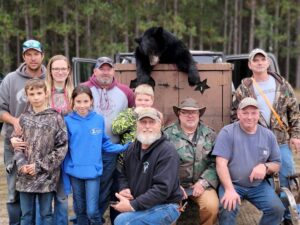 Amanda said, “No matter how hard hunting got and how many challenges Lily faced, nobody gave up on her. Everyone involved was amazing, and we are grateful to everyone who helped along the way.

Thanks to Kyle Maurina for donating his bear license, Bruce Waturba, Dan & Karen Judy, Rich Starzer, Jim Starzer, and Brian Barenek for participating in the hunt. Also, Meatski’s Butcher, A Breed Apart Taxidermy, the Sportsman Clubs, local businesses, and USSA donors for their financial support. Congratulations to Lily on her trophy bear and unforgettable memories shared with her family and newfound friends! God bless!