USSA big game hunting kicked off with a bang!

The trail of Colt’s dream of a trophy buck lead his father, Mike, and him to Wilderness Whitetails located in central Wisconsin.

After target practicing, Colt and Mike were taken to a stand by their guide, appropriately named ‘Hunter.’ Deer movement was good, and three and half hours later, a beautiful buck would present Colt a good clean shot. The Savage .243 barked as Colt squeezed the trigger, and the huge velvet 9-point trophy buck ran a short distance before falling over. The excited young hunter and Mike approached the biggest deer they had ever seen. 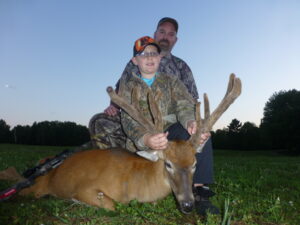 The following morning, Colt and his father took home a cooler full of venison. The family had a backstrap cooked in olive oil and butter that was out of this world.

We want to thank the Flees family and Wilderness Whitetails for their dedication to the needs of special kids who cannot experience the thrill of a trophy hunt without people that care. The hospitality and experience will remain with Colt and his dad forever!

Special shout-out to their fantastic guide Hunter for putting Colt in position to spot a buck of his dreams! God bless!