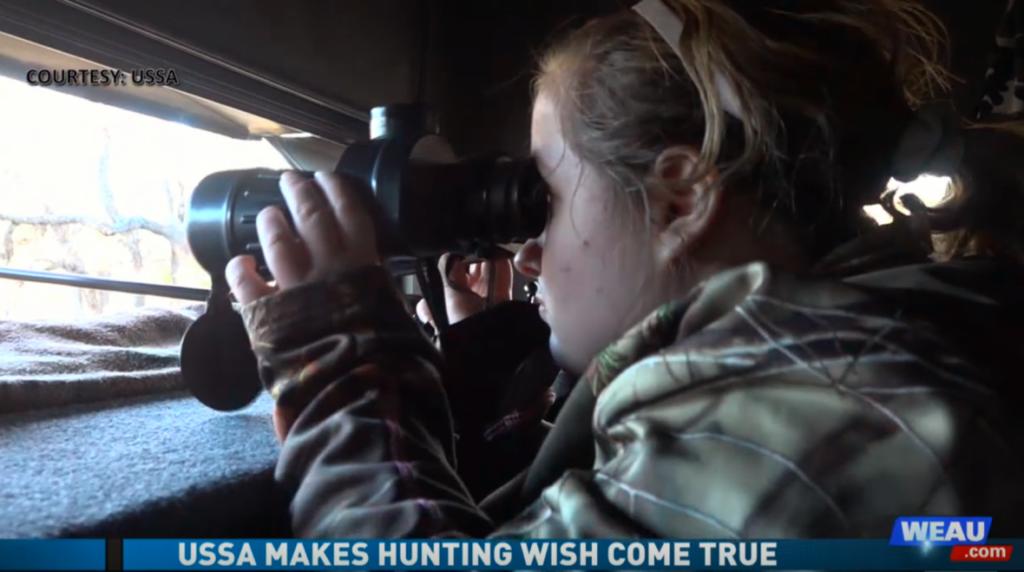 MONDOVI, Wis. (WEAU) – One local teenager in Mondovi has had a dream of harvesting a buck for a while now. Thanks to an organization in Pittsville, Wisconsin, that dream became a reality.

I got really excited. I was shaking a little,” Kleinschmidt said.

But Kleinschmidt’s dream hasn’t always been to harvest a buck. According to her mother Wendy Kleinschmidt, Chloe loved the outdoors, but not necessarily hunting.

“Chloe was a little afraid of the gun at first,” Wendy said. “We let her shoot and after a few times and now she’s had an appreciation and a love for the hunt.”

The Kleinschmidt’s contacted Brigid O’Donoghue, the USSA to see if they could help Chloe experience an outdoor adventure. USSA is an organization that provides free outdoor adventures for youth and veterans with life-threatening illnesses or disabilities.

“I believe I saw it on a news station, so I contacted Brigid and said hey how do we get involved,” Wendy said.

Life has not always been easy for Chloe. She has spina bifada, which has led to 19 surgeries and left her paralyzed from the waist down. But don’t think for a second that was going to slow her down.

“I really wanted to go because I have never really been away from my family, this gave me a chance too,” she said.

“Saying goodbye was a little bit rough, but once she was at the airport and on her way it was good,” Wendy said.

The hunt was finally set up in Doss, Texas after six years of planning.

“Brigid called me and I got really excited,” Chloe said. “She told me she got 2 plane tickets and she wanted to know if I wanted to go with her.”

But Chloe said she had never been a on a plane

“I was nervous at first,” she said. “We got to the airport early and i got to see the planes take off, so then I wasn’t really nervous.”

In Texas, Chloe was able to bag an 8-pointer.

“We’re going to have to make more room on the wall,” she said. “The greatest park of the hunt was shooting a buck, because I’ve never done that before.”

She also got a new nickname.

“They called me Annie Oakley,” she said.

Chloe said she is going to show off her trophy.

When I get my deer back, I’m going to put it in the living room so everyone can see it,” she said.

Wendy said without USSA, Chloe might never have gotten this opportunity.

“Any disabilities, great or small, try it. If your kid has any love of the outdoors whatsoever, USSA offers all kinds of great things,” Wendy said. “You never know what your kids are going to love.”

“I couldn’t decide what my favorite part was because it was all really fun,” Chloe said. “I’d do the whole thing over again.”