Vets Enjoy the Peace and Fellowship 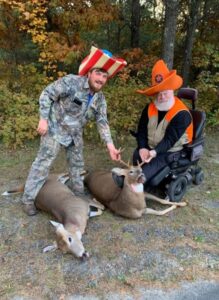 The beautiful hill and farm country of Gays Mills, WI, provided a warm welcome to Troy, an Air Force veteran, and Dale, an army veteran. On the first day of their hunt, Troy and Dale were in the blind with their mentors, but no deer came out.

Troy said, “I knew the deer would be moving the following morning, and so we were in the blind before daylight.” Then, at 7:09 am, a nice deer came out 40 yards in front of them.  Troy squeezed a shot off and the doe was down at 7:27 am. “I was calm until I pulled the trigger, and the deer flipped, then emotions kicked in and we celebrated.” Later in the day, Dale and his mentors saw five deer; one came close but never came across one of their shooting lane. Later, four more deer came out and ran across the field in front of them, and another young deer was spotted within 130 yards of the blind. 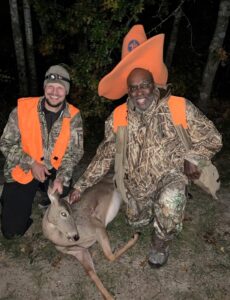 Terrence served in the United States Army for 23 years and learned about the deer hunt from the Wisconsin PVA. During the hunt and an hour before closing time, a buck pushed a doe out into a clear-cut. Terrence and his mentor, Chris, watched patiently as the deer came into the shooting range. He set the Savage .30-06 rifle on a tripod and looked through the scope. Terrence said, “My heart was pounding, and I took deep breaths and finally got my composure. Then I took a shot but missed, and the buck ran off.” With little shooting time left, Chris advised him to take a doe that was in range. He lined her up on the crosshair and made a perfect shot; she ran up the hill and rolled back down. Terrence said excitedly, “I made a beautiful shot, and it went straight through! Oh my goodness, I have not shot a deer in five years! If my left side wasn’t so messed up, I would have done a happy dance or a jig!” 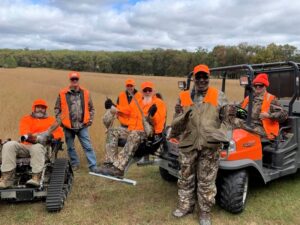 Meanwhile, Dale and his guide Don saw 4 to 5 doe in their stand, most of them within 100 yards. They waited patiently for a buck, and after a while, the deer left. Shortly after, a deer came back, chased by a coyote, and it got dark, and the day ended.

Early the following morning, the vets went pheasant hunting at Woods & Meadows in Warrens, WI. Marine Core Veteran Kirk stated, “the pheasant hunt was spectacular. Our guide, Amy, handles German Shorthairs, and they hold the point and wait for you to get ready and flush the bird, and then if you flush a rooster, it gets up and cackles. The birds I shot were dandy roosters, and we spent four hours, and it was a great time.”

Dale added, “the pheasant hunt was fantastic! They put me on a chair in front of a UTV, and it was able to turn to the right or left when the dogs pointed, they would get me into position, the birds would flush, and I would have a chance to shoot at it. You never know what a bird will do,” he chuckled!

That same afternoon, the veterans and their guides returned to their deer blinds and sat patiently, hoping a buck would come out.

Around 4:15 pm, an 8-point buck meandered out of the woods, walked through the meadow, and gave Dale a perfect broadside shot, and the buck was down. Shortly after Don dragged it out of the field, a young deer was grazing about that area, then it left. Dale said, “then two more mature does come out to feed and about at 5:15 pm, and one gave me a nice shot to harvest. Two deer in one hunt is pretty incredible!”

Kirk and his mentors Darrell and Guy, saw three small bucks, several does, and twenty-two turkeys. So with a half-hour left to hunt, he decided to take a doe and dropped her in her tracks. 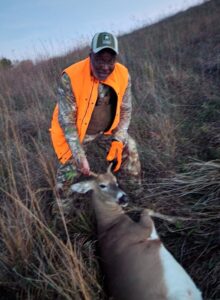 Terrence and his guides saw a bunch of turkeys come in, too; then the wind died down, and several does come out into the field. Finally, with only five minutes left to hunt, Terrence’s guide peeked out the window and whispered, “look, there is a buck coming in.” The 6-point buck came into the clear cut and looked one way, then another, and Terrence got him in the crosshairs and made another perfect shot.

Dale said, “The USSA mentors are some of the nicest people we have ever met, totally respectful and attentive to our needs and safety, which is paramount in my life; we need to know we’re in comfortable surroundings.

Army veteran Rickey said, “What a great opportunity to get outdoors and enjoy the beautiful scenery. Even though I didn’t get an animal, it was extremely rewarding to listen to the birds and see the countryside while enjoying the great beauty and wonders of the outdoors.” 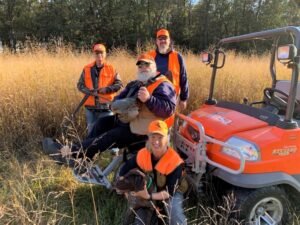 Congratulations to the veterans on their successful hunt and the nutritious and delicious venison and pheasant they will enjoy with their families! God bless!

If you know of a deserving veteran who might want to attend a free fishing or hunting trip, don’t hesitate to contact United Special Sportsman Alliance.