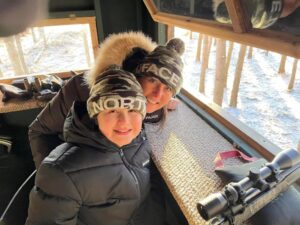 Max was excited to learn that he was going on a deer hunt at Wilderness Whitetails which resides in the northern hardwoods and rolling swamp country of central Wisconsin.

When they arrived at the ranch Max and his cousin Austin both 11, and Sarah met their guide, Hunter Conrad. It was around 2 pm, so they drove out immediately and settled in an elevated 12′ high box blind. There was a light dusting of snow on the ground, around 20 degrees.

Max said, “I was fired up when we saw a buck and four does come out in the field. But the buck was too far out, so we stayed in the blind until the sun went down.” Then they all headed back to the ranch, where they met the owners, Greg Flees and Shorty Flees, and enjoyed a delicious dinner. Later that evening, Max’s Stepdad Mark and Uncle Andy arrived, and the kids filled them in on what happened in the blind. 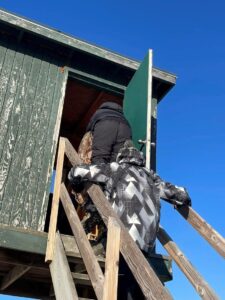 At half past five the following morning, Max, Sarah, Andy, and Hunter headed back out to the blind. Sarah said, “It was a miracle blessing. Max decided to walk up the twelve stairs and into the blind, which Max doesn’t typically walk up the stairs.” First, they saw several bucks in the field but were not in shooting range; then, as the morning progressed, a nice buck came into view, but it turned sharply, and its butt was facing them, so Max couldn’t place a good shot. Returning to camp, they went out for breakfast at the local restaurant, and the morning’s specialty was a cinnamon roll pancake that was bigger than the plate. Max said, “I only ate a quarter of it.” But, his mom added, “then we all had a few bites.” 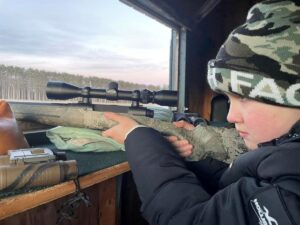 Later that afternoon, the hunters went to another elevated blind in a different area. Hunter could tell Max was exhausted and piggybacked him up the twelve steps into the blind. Max said, “We saw two nice bucks, but I couldn’t shoot them because they were too far away. But, felt I could shoot a deer if I got a chance because I was practicing sighting them in with the rifle without ammunition.” Everyone continued watching out the windows, hoping a buck would come into the field of view for the young man, but time wounded down, and it was dark, so they returned to camp.

Max, his mom, stepdad Mark, and their guide returned to the blind early the following morning. It wasn’t long, and a buck and some does come out into the field back by a heavily wooded area, and then a buck took off towards the woods. Shortly afterward, Mark saw another buck out the side window, and he quickly changed seats with Max. They quietly open the window, and Hunter set the 7mm-08 Savage rifle in the gun rest. Max got the buck in the crosshairs, squeezed the trigger, and the 14-point buck scoring 131 B & C inches was anchored right where he was. 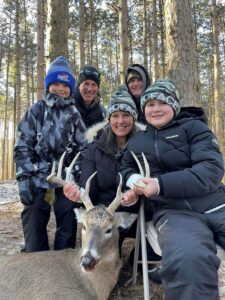 Max said, “After I shot it, everyone said, good job. Then we went out in the side-by-side UTV to see my deer. It was my first time taking an animal, so I was kind of sad yet very happy at the same time.”

Hunter said, “Everyone in the group was excited yet almost slightly concerned and hopeful for everything to come together. I jumped up and immediately hugged Max, Mark, and Sarah as tears started running down her face. We put in our time, and Max deserved that opportunity and harvest. Max also had to make a challenging shot for this particular buck wasn’t making it easy on us, and he executed his shot perfectly. As I guide, I couldn’t be more proud of him!” 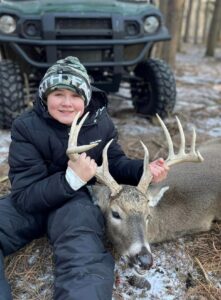 Max replied, “Hunting is a great sport if you have my disability because you can’t do any other sports. It doesn’t matter what disability you have; you can still go hunting.”

“The best part was seeing my son smile; it was like out-of-body happiness, no care in the world, having fun, and building self-esteem. After he shot the buck, he was like the King of the woods. It’s a memory that will last beyond anything you wish for with your child,” said his mother.

Christmas is the spirit of giving, and Wilderness Whitetails has given free hunts to USSA recipients for almost twenty years. We are forever grateful for their dedication to the needs of special kids who cannot experience the thrill of a trophy hunt without people that care. Congratulations to Max on his trophy buck and the fantastic memories shared with his family and newfound friend and guide, Hunter.

If you are interested in getting involved or know of a deserving child or veteran, don’t hesitate to contact United Special Sportsman Alliance.